(From NEXT) Their first day at school

Posted on September 20, 2010 by adeolaadeyemo

“It’s like children don’t cry anymore on their first day at school,” said Adaobi Ikenna, a beautician and mother of one at her son’s first day at school. “My son just saw some kids playing with toys and forgot about me. He didn’t even know when I left.” And so did her son begin his school life; devoid of the tantrums traditionally displayed by reluctant children on their first day in school. According to Mrs Ikenna, she thought it would be an emotional moment for her son and expected him to cling on to her, but he didn’t. He found more interest in the toys and kids in his class and soon forgot about his mother’s presence.

It was however different for Kate Mordi, a banker and mother of two, who took her second daughter to school yesterday for the first time. After spending some time with her two-year-old daughter at Heartland Nursery and Primary School, Yaba, she made to leave but found it difficult to ignore her daughter’s cries. “She cried a lot,” she said. “It was hard to leave her. Most of the kids there were crying also. I felt very sad but her teachers encouraged me to go, saying she was in good hands and would soon get over it. It was very emotional for me.” Joke Hassan also had a similar experience at her two-year-old sons’ first day at school. According to her, his cries followed her till she was almost out of the school compound. “My son has been to a crèche before but I changed his school and put him in a full nursery and primary school,” she said. “I was expecting him to adapt easily but it seems he was not prepared for a new environment. He cried and cried when I was about to leave. But when I called his teacher about an hour after I left the school, she told me he had calmed down.”

Francine Okonkwo, a teacher at Chrisland Schools, explained why most of the first timers felt comfortable. “Not all the kids are coming to school for the first time,” she said. “For instance these two,” she said pointing at a boy and a girl, “are from Pre School One and they are already familiar with the school environment. When kids are around other kids that are crying, it makes them cry also. But when they see others playing around, they feel happy and join them. They make friends easily. It won’t take them long to adapt to the school environment.” Also, Ogochukwu Imade, another teacher, adds that parents who cling to the child too much on their first day at school make their children cry more. “Parents should not feel bad about leaving their children in school,” she said. “Sometimes, it is the way the parents hold on to them that makes them cry. If you try not to make a big deal out of the fact that you will be leaving him in school, the child will just mix easily and won’t cry.”

To pay, or not to pay

For Shade Ogunlana, a first time mother, it is too early to start paying large amounts as school fees for her child who will soon clock two years. “You should see the amount they charge as school fees for these small kids,” she said. “A good school will charge nothing less than N300,000 for a two-year-old child for one year of schooling. My child will clock two in a few weeks time and even though people around are telling me to send him to school, I prefer to teach him at home for now, at least until next year. I can’t afford such an amount just for him to go and play and sing somewhere.” However, Mrs Ikenna is optimistic that her son would benefit from socialising with his peers, adding that it was enough reason to pay a large amount for his school fees. “Honestly, I don’t know what they are going to teach him in school with the exorbitant school fees they are charging,” she said. “It’s not like he can hold a pen and write yet. But I think it will be good for him to socialise and be among his peers. He is already having fun and for that, I think it is worth it.” 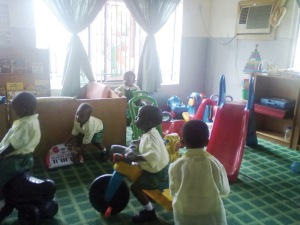 I am a journalist and writer.
View all posts by adeolaadeyemo →
This entry was posted in Uncategorized and tagged 234next.com, Education, Family, NEXT. Bookmark the permalink.