(From NEXT) In the world of a mouth painter 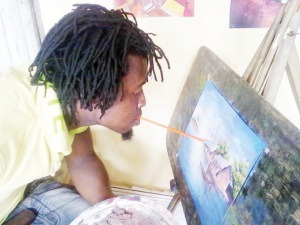 Leaving home at the tender age of twelve to search for greener pastures is what most people would call ridiculous, but that is exactly what Tosin Agbabiaka did.

Coming from a humble background, he decided to leave his parents and fend for himself.

“When I was eleven years I had polio, which made one leg deformed. It was caused by injection needles on my vein, by a nurse where I was living at Onitiri. Since then, one leg has stopped growing. Also, I come from a very poor family. I have three brothers and one sister. Things were very tough for us, so I decided to leave home.”

A kind-hearted man, Sheriff Lawal, whom Tosin calls his godfather, took him in and helped him develop his skills.

“My dad is an architect, he taught me how to sketch. He actually wanted me to be an architect, but I had more interest in painting; so I decided to be an artist. I already knew some things about painting when I got to Mr. Lawal’s place. He is also a painter. I told him I knew how to paint, so he trained me.”

Tosin did not only get training from his mentor. He also went ahead to pursue a degree in Fine Arts at the Yaba Polytechnic. He was only able to get an Ordinary National Diploma, due to lack of funds.

This did not deter him from following his dream of becoming a professional artist. He forged ahead, and today, twenty years after he left home, the Kwara indigene can boast of some artistic skills.

“Apart from landscape and portrait painting, I can work on stained glass and do lots of designs with it. I am also a sculptor. Moreover, I do both permanent and temporary tattoos for people. For the portrait painting, I paint people sitting down or sometimes I use their pictures. It can take up to four hours, but I prefer using their pictures. I have done mural painting for some primary and secondary schools. I use poster colour, oil on canvas, pastel paint, and wall paint,” he said.

But amidst his achievements, Tosin says it has been a very rough road and he had faced many challenges.

Looking around his studio, which is in the same building as his residence, with a dejected expression, Tosin said his environment, Ilasamaja, is not favourable for the kind of work he does.

“I stay in a local area where people don’t really value art. My paintings are sometimes sold for peanuts here. I hardly have people who come in here just to buy my work or order for it. Most times, my work is sold through my collector at Ojuelegba who collects my paintings and pays me after selling them.”

However, in spite of his challenges, Tosin said he is thankful to God for his gift.

“Poverty made me discovered my talent. I use my hands to paint, but I’m more perfect with my mouth. Sometimes, I put my painting outside and perform publicly by using my mouth to paint. This will attract people, who sometimes give me money.”

On his left shoulder is a bold tattoo, which reads ‘John 11:35, Jesus Wept’ around a round-shaped design. When asked about its significance, he replied with a smile.

“It is just to advertise my work. It is a permanent tattoo that can only be removed with a laser cleaner. A permanent one like this costs seven thousand naira, while a temporary one costs twelve thousand naira. I did it for people to know the kind of work I am doing.”

After many years of training under his mentor, Tosin now has other young boys he trains and fends for. This, he said, is his own way of helping others and giving back to the society, especially when he had such an opportunity before. He said he hopes to have his own family someday, and would do all he can for his children.

“People who are well to do should continue spending all they have on their children, because they are the future.”

I am a journalist and writer.
View all posts by adeolaadeyemo →
This entry was posted in Uncategorized and tagged 234next.com, Art, Creative, NEXT. Bookmark the permalink.